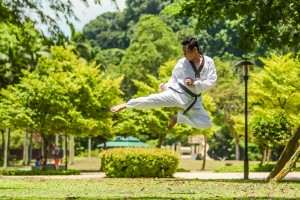 Most of us grew up watching martial arts movies. In those films we watched actors perform crazy acrobatic feats. Jumping in the air and knocking people out effortlessly. Mixed martial artists due to increasing their striking ability in recent years have been able perform acrobatic kicks on their opponents in real fights. So, is it possible to perform these kicks in the street?? Let’s explore!

Generally kicks above the knees shouldn’t be used in a homicidal attack. That’s it thanks for reading!… Kidding! Seriously…you have to be careful. The reason is kicks to the head and body tend to have a greater chance of compromising your balance more than low-kicks . This is increased even more if you’re fighting on dangerous terrain. If your assaulted on ice, in the rain, on an uneven surface, blood, a  slippery floor and/or where there is debris on the ground it comprises your kicks. Most likely you will fall and cause injury to yourself and have to fight in a more compromised position on the ground.

In addition, a lot of times you won’t have the space to get off high-kicks. Imagine! Suddenly two guys who are 300 pounds are behind you and grab you. Do you have the space to get a high-kick off? A spinning back-kick? Probably not and if you tried you’d get knocked off balance and struck. Or consider if you’re attacked suddenly in an elevator. In such tight quarters you can’t get off more elaborate high-kicks.

3. It takes time to get those kicks off

Also doing high kicks can take too much time. Remember real-world assaults happen in very close proximity. If two people are standing infront of one another and one person is attempting to do one of the more elaborate kicks of martial arts and another is told to just reach out and jab the others face or choke the person. The person who’s jabbing or choking will touch first because it takes less time to jab a person face. Remember distance equals time. It takes longer for that person to raise their leg up in the air and reach someone’s head. So in that sense it’s rather inefficient.

Now I want to be clear people can get high-kicks off in assaults. It’s more common in scenarios where two people agree to fight with each other and square off but in assaults definitely happens. Usually elaborate kicks are easier to deliver when there’s one attacker, no weapons and “safe” terrain. That said it’s up to the person if they want to assume these things will be in their favor when they’re assaulted. Sometimes they will be and sometimes they won’t be.

The better option is to favor low kicks, stomps and knee strikes. These strikes overcome all of the above difficulties that we just mentioned above. Of course there’s no guarantees but the odds are more in your favor. Lowkicks hit there target sooner. You can get them off regardless of how close an attacker is to you. So…if you’re a high-kicker how about adding some efficient low-kicks to your repertoire so you’ll be combat ready!