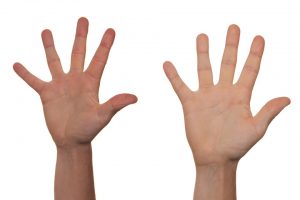 1. Palm-strikes are more effective than punches

One of the surprising aspects to Guided Chaos is we don’t train clients to strike with a closed fist primarily. Due to the popularity of combat sports people think the most effective way to strike an adversary in unarmed combat is with your fist. However, that isn’t true due to the ease you can break your hand, the relatively little damage it does when it lands compared to other blows and it’s lack of versatility. That’s why in close combat you want to focus primarily on open-hand blows such as palm-heels.

2. They cause more damage

Blows delivered with the palm are one of the most damaging blows that you can deliver to an assailant. When done properly palm-strikes can seriously injure attackers of any size. When they land underneath the chin they push the head back putting severe pressure on the spine and neck. Also they don’t require you to be very large or strong in order to work. A small 120 pound person can knock out a 250 pound person when applying this blow correctly. Never expect that to happen but it’s definitely possible. Executed with surprise a palm-strike can cause serious shock to the nervous system.

3. You won’t break your head

Palm-strikes cause little damage to your hand when executed with proper technique and are easy to learn. Closed fist strikes can break your hand because of bad technique and the wrist bends on impact when hitting hard surfaces. This is why boxers and other sport fighters train to hit properly and wear wrap over their hands and then gloves. The wrap keeps the wrist from bending and gloves varying in size act as pads for your fists. This allows sports competitors to hit full-power without fear of injury. Also keep in mind that even if you hit with your fist using proper technique your hand still has a high chance of breaking. The amount of force you’re able to generate is too much for your fist. Remember that Mike Tyson broke his hand after punching Mitch Green in a street fight. Mike Tyson definitely knows how to throw a punch properly but still broke his hand.

Palm-strikes on the other hand can be delivered with full-power and full intensity with little risk of injuring your hand. When applied properly all of the problems associated with punching are avoided. Now it is possible to injure your hand using bad technique with palm-striking. But once you learn proper technique it’s very easy to avoid. Furthermore palm-striking doesn’t suffer from the “force generation” problem that the fist does. You’re able to hit full-power without fear because the wrist is protected.

Palm-striking is more versatile than punching because you’re able to hit to more damaging targets and they move naturally into other blows. A punch can be delivered to the solar-plexus and specific soft spots of the head. But palms are able to strike the chin, nose, side and back of the head. These are the places that you want to hit primarily because they have the highest chance of stopping your attacker. Furthermore palms naturally “chain” into other blows such as elbows and chops. This is an important principle called multi-hitting that’s exclusive to guided chaos. When you strike with your palm you immediately pull your palm back to your face so you can hit with your elbow in one motion.

To strike with the palm you’re going to want to keep your wrist straight and fingers crimped. There’s no need to keep them together or straight. This blow should ideally hit the face and your fingers should go straight into the eyes as well which is why your fingers should be crimped. Your fingers will find the eyes even if your fingers aren’t straight. You can also aim for the bridge of the nose or under the chin. This blow can be delivered from any relaxed starting position that you assume when you’re faced with a potential assailant. When striking stomp hard on your lead foot as if you’re trying to squash a banana underneath your feet. This allows for your whole body to be behind the blow. Also retract your hand as fast as you can after you hit your target so you’re in an ideal position to hit again and if you miss you aren’t over-committed.

Happy Palms people and let me know how your training goes!