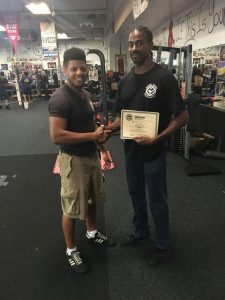 Reflections on my trip to New York

I reflected on my years of training in Guided Chaos as the evening came before my departure. As I prepared for my journey every move was made with the principles of the art in mind. By the time I landed I accomplished two years & three hundred minutes of mental “flow” and eager to gauge my ability. I returned full of knowledge with insight into the importance of upright movement, body unity, guiding punches, forming the weapon, looseness, best defense is great offense. As I recall glimpses of my training with the masters its the fuel of my motivation.

I approach the training floor and see a figure in the corner in the pose of Buddha. Grandmaster John Perkins is overlooking and critiquing members of the class as they train. I say to myself “I shall know the truth soon”. As soon as I touched hands with Grandmaster Perkins I realized that I know nothing. He effortlessly let me do what ever I wanted and would throw my balance off and hit me. Then he said I have good attributes for guided chaos which was great to hear. He then performed a multiple attacker demonstration where he tossed myself and two other students while hitting from all directions.

He then had me work with the rest of the students who were training that day. Members of the class complemented my sensitivity as we worked, I got that much right. The “Zen Gorilla” worked on the same floor as me and I couldn’t help but feel honored. Then I asked Lt Col Al if I could work with him and he said of course. He kept bringing my attention to relaxation which would help me hit harder and evade strikes. It seemed in vain as it seemed impossible to avoid his palm strikes, chops, elbows and anything else he felt like hitting with. Through working with him I understood the manta “unavailable yet unavoidable”.

“Tuning your art is the only way I believe growth is possible. With the masters of KCD revealing the reasons being, we can make chaos guided”. Yosef Susskind a fourth degree black belt told me that while we talked after class. However nothing could prepare me for training with Master Michael Watson. As I walked in I noticed him stretching on the floor. He’s well known to push students endurance and ability to the next level during his assessments.

I had the honor of being “assessed” which resulted in me being thrown across the room many times as he reminded me to stay relaxed and evade. After giving me tips, on the importance of body unity and upright movement he shook my hand and training concluded. I noticed a ring was circling and I was called up to receive my black belt! I remembered what Lt. Col. Al told me when I asked him about training. He said that we represent Guided Chaos and that we are capable of much more than what we think. From this point the art is mostly mental.