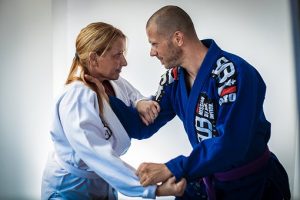 1. Grappling is ineffective against multiple assailants

In my last installment I discussed the problems with using Brazilian jiu jitsu as self-defense. Now, I’m going to discuss specifically the problem with Bjj in regards to fighting multiple assailants. Many Bjj practioners are dismissive of this weakness of Bjj claiming nothing can defend against that. That isn’t true as there are proven strategies that enable you to defend yourself against multiple assailants. Furthermore, out of all the strategies for multiple attackers grappling is the worst. Grappling is ineffective because you can only grapple one person at a time, and it puts you in bad positions to defend yourself. Also a complete self-defense system must defend against multiple attackers standing and on the ground.

2. You can only grapple a single person at a time

Grappling only allows you to fight a single assailant at a time. It’s impossible to control two or more people who’re resisting and hitting you. The reason is your arms and legs can only control so many body parts at a time. For example a simple single-leg takedown can only be applied on one persons leg at a time. Or consider the many sweeps and transitions used on the ground. All of these tactics give you control over one assailant but leave you in precarious positions when fighting more than one.

Furthermore, you can only finish a fight with one person at a time using grappling. You can’t choke two people, or apply joint locks to multiple people on the ground consistently. This is in direct contrast to proper striking skills which can end a fight between multiple at a time. Even if you choose to focus on one person you can quickly  engage a second person which is difficult with grappling.

3. Grappling puts you in bad positions to defend yourself

The “dominant” positions of Bjj are highly problematic when applied to multiple assailants. Being in full-mount is an effective position to be in no doubt. That said, it’s also an extremely vulnerable position to be in when dealing with a second assailant who wants to punch or kick you. For example, one of my friends told me a story about a bouncer who dealt with a drunk patron outside of a club by taking him down and full-mounting him. When he was about to finish the fight the patrons girlfriend took off her shoe and punched the bouncer in the face with his heel. He lost an eye in that situation.

Also, brazilian jiu-jitsu encourages you to stay in dangerous positions in order to achieve a submission. These dangerous positions especially apply to closed guard, half guard, open guard etc. Bjj enthusiasts argue that these positions are desirable to go into if you have an attacker on top of you. The reason is that a smaller person can use leverage and proper technique to avoid damage, tire their opponent out and get a submission. The problem with is criminal accomplices will stomp you. Bjj experts in early MMA events at times took upwards of thirty minutes to submit bigger opponents. This was feasible because there wasn’t a threat of a third-party attacking the one of the combatants.

Grappling puts you in precarious positions if the multiple assailants decide to attack you after the initial unarmed single attack. Many grappling enthusiasts argue that while this may be true that it’s still an effective strategy to employ against a single adversary. However, consider that multiple assailants is always a possibility in an attack. Multiple assailants similar to weapons often come out after the initial single, unarmed assault begins. So it’s dangerous to assume that because a fight starts with one person it will end that way. Also bystanders often get involved and can intervene with varying levels of aggresiveness

4. A self-defense system must address how to deal with multiple assailants standing and on the ground

Furthermore, don’t expect that you can “switch” strategies while being attacked. I’ve heard grapplers argue you can employ a grappling strategy and then change strategies if you realize you’re being attacked by multiple people. The problem is your attackers won’t allow you. If you’re in closed guard your attacker won’t let you stand up and strike them. There going to aggressively try to keep you on the ground so they stomp and or punch you.

A self-defense system should offer sensible strategies to deal with multiple people. If not you’re at a serious disadvantage regarding your personal safety. Don’t believe the argument that nothing defends against multiple attackers. Remember that teaching martial arts is a business. The more you believe specific instructors the more income they make because you enroll in their class. Many aren’t going to perpetuate the truth if it affects their income and school enrollment. That said your personal safety is your main concern and you need to make decisions accordingly.