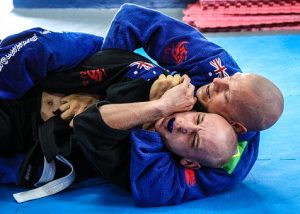 1. Bjj as the ultimate self-defense

Inevitably if you study martial arts you will hear about Brazilian jiu-jitsu. To many bjj represents the pinnacle of self-defense, the ability to defeat a larger, more aggressive attacker without inflicting serious injury. Americans always wanted the skill to have a physical and moral victory, to win and not have to beat assailants into bloody pulps. Sounds good to me…so why all the hate?
Then there is the other side which views bjj as very problematic for self-defense. They argue you shouldn’t attempt to take a fight to the ground because it’s more dangerous than standing on your feet. You’re more susceptible to being injured and are less mobile. So the community is split and generally each side doesn’t respect the others point of view.
First and foremost I want to state that I personally love brazilian jiu-jitsu. I trained in it from when I was 14 to 19 at the Renzo Gracie academy in Manhattan under John Danaher and at unit 2 fitness under Roberto Travern in Atlanta Georgia. I’m forever grateful for the information I learned and the training was excellent. Brazilian jiu-jitsu and it’s teachers hold a very special place in my heart. I say this so that you won’t believe I’m biased against bjj. That said I must be objective about it’s effectiveness as a self-defense art.

2. What makes an art effective?

The definition of effectiveness is not agreed upon in martial arts. Historically the effectiveness of bjj relied on if it worked in early MMA competition and no-holds barred fights. Other arts show videos of them using their techniques in a fight and how it works. Therefore from this we can infer that generally the martial arts community argues if it can be used in a fight or match then it should be taught as self-defense.
The problem with this argument is that it ignores the context in which the techniques are being applied. So a boxer knocks someone out with a right hand? Teach it as self-defense! Bjj fighter takes someone to the ground and submits them in a fight? Teach it as self-defense! Someone headkicks an unsuspecting assailant teach it as self-defense! Someone puts an attacker in an aikido wrist lock and he then quits and runs away? Teach it as self-defense! The problem is in a certain context everything could potentially work. A head-kick might work in one scenario but not against two assailants on a staircase. An aikido wrist-lock might work in one scenario and be completely ineffective against a bigger attacker on drugs who’s resilient to pain. So arguing that if it works in a fight it’s a good strategy for self-defense isn’t true.

Since were talking about bjj let’s examine the context with which they proved their arts effectiveness. Primarily the Gracie family engaged in one-on-one matches against other fighters. Multiple attackers weren’t allowed, weapons weren’t permitted, it was an open area, well-lit, the fighters were never on drugs, they didn’t want to kill each other, there was a gentlemanly code of conduct despite officially there being no rules and females never fought against men. This list is by no means exhaustive but you’ll notice that each of these variables that weren’t in these matches is a normal component in assaults on the street.
Multiple attackers is normal, weapons is normal, people are attacked in the dark and in poorly lit areas, people are attacked in small enclosed environments, attackers are on drugs, they want to kill victims, and women must defend themselves too. Therefore, from this we can see that there was a huge portion of evidence that’s lacking in order to “prove” the effectiveness of BJJ as far as self-defense is concerned.
That’s it for Part 1! See you next time!