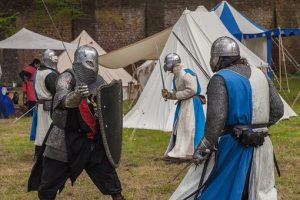 1. Training for a fight or an Assault

Martial arts is intended to train you to win a real fight. After studying martial arts though you inevitably hear some argue certain things won’t work in a “real fight”. But what is meant by a real fight? The truth is that there needs to be a distinction between a “fight” and an “assault” to give a meaningful answer. A fight is a situation where two people agree to engage and harm one another. An assault is an unprovoked attack that is forced upon a person.

The problem with martial arts training is they don’t make this distinction and train people primarily on how to win “fights”. This is problematic because techniques that work in fights often don’t work in assaults. Therefore, well discuss how fights are different than assaults and how training usually doesn’t help survive assaults. Lastly, well discuss how training can be changed to be effective for the street.

2. The difference between assaults and fights

Most martial arts train you to begin fighting from a stance. Arts like boxing, muay thai, karate, brazilian jiu-jitsu train you to fight from a stance and implement your techniques. The idea is there is an attacker who’s in a stance who’s trying to impose their techniques on you too. This is evidenced by the fact when arts like brazilian jiu-jitsu attempted to prove their effectiveness in fights they squared up with their opponent and fought. Boxing shows it’s effectiveness in combat by putting two people in a stance and they begin to engage. All of the arts I mentioned start fights in the same way.

The way assaults happen on the street is different than how martial arts prepare you. On the street attacks begin with an interview where a criminal distracts your attention and then suddenly attacks you or his accomplices suddenly attack you. Or there’s no interview and you’re suddenly attacked by one criminal or several randomly. Many attacks happen suddenly like this. All attacks of this nature are deadly. In most forms of sport-fighting hitting to the back of the head is prohibited. The reason is it’s extremely dangerous and can cause serious injury. Many times when unintentional back of the strikes happen they do serious damage to competitors and end fights. All this said the point is that these types of assaults don’t allow one to get into a stance.

3. Assaults can involve more than one person

Assaults begin from different positions that are unexpected. Attacks can happen from all types of inconvient positions. While you’re sitting down, watching tv, on the bus etc. But the arts I’ve mentioned never discuss how to defend yourself from these positions. They assume that on the street you’ll be able to go into a stance and start fighting. But in an assault you don’t get to decide when you’re ready and prepare by going into a stance. Assualts happen from any position at anytime anywhere.

Weapons training should be taught very differently for the purpose of assaults. In the majority of combat sports they don’t teach how to deal with a weapon within the context of how assaults happen. Again some might teach knife defense from a “fight” persepective. For example the person show the knife and then attacks with it but this isn’t reality. In reality often you don’t even see the knife until you’re already stabbed. You’re fighting and then suddenly they bring a knife out from their pocket because their losing and start stabbing you. Or suddenly you feel someone stabbing you repeatedly in the stomach and you have to fight immediately. This is completely different than how martial arts train you.

Most assaults happen in very tight, close quarters in contrast to how martial arts train you. However martial arts don’t usually spar in tight quarters like this. Boxing rings, mma octagons, open mats are where you train in most arts. This is problematic because in tight quarters you won’t have the opportunity to move around like in boxing training, or wrestle like in bjj class. Fighting on an elevator, in between cars, small hallways and between furniture doesn’t afford the same type of movement that you have available in sparring contexts. For example due to the close quarters of assaults you can’t get certain kicks off, punches are more difficult. Head movement becomes more difficult but these issues don’t arise in sparring often because you have so much room. Grappling can be a good option but still this is problematic against weapons such as a knife.

6. The environment is very different

Often the training in martial arts doesn’t take much consideration of the actual environment you fight in during assaults. You will be assaulted on concrete where there is fire hydrants, brick walls behind you, glass and other debris. In an assault all of these will be used against you, you’ll be slammed into them, glass will slice you up, your hand can be bashed into walls and the concrete. You can trip over fire hydrants and fall and still have to fight from that position. Sparring doesn’t contain these elements as it’s in controlled environments and “fights” between two people are usually in more controlled environments as well. You can’t expect that you’ll be assaulted under these ideal conditions.

Well that’s all folks! Till next time…bring the chaos!