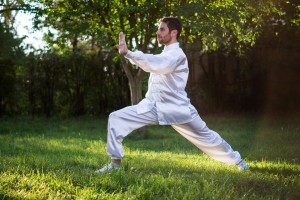 The Truth about Stances in Combat

Martial arts have an enormous amount of stances they teach. Arts such as karate, tai chi, boxing and wrestling have specific stances that you’re supposed to fight from. Certain stances range in effectiveness as proven in boxing and early mixed martial arts events. The general view is that some variation of a boxing stance is the position that you should be in during a fight. Certain stances offer different problems than others. For example, boxing stances are open to leg kicks, taekwondo stances can be weak against punches etc. However, despite their success in sport-fighting they’re problematic for homicidal assaults. Usually because there isn’t enough time to get into a stance, they alert your attacker to what you’re about to do and you need to learn to fight from random positions.

2. Fights start different on the street

On the street you will either be attacked by surprise or “interviewed”(verbal banter used by criminals to size you up) and then attacked. All assaults fall into one of these categories. For example, assailants will come up to victims, engage them in conversation and attack them when there guard is down. Or they will simply surprise them by suddenly attacking them from the front or back. If you’re a victim of the first type of attack getting in a stance wouldn’t make sense. Why if someone on the street engaged you in conversation would you go into a boxing stance? That wouldn’t make any sense because they haven’t indicated they want to attack you. Getting into a stance this early would only escalate this scenario. In the latter situation you won’t even get the chance to get into a stance. It’s too late now as you’re getting struck from all angles.

3. Don’t go into a stance, just attack from where you are

4. Don’t always have time to go into a stance

In street assaults you can be attacked from different positions before you’re “ready”. Attacks happen when you’re reaching to grab something from your car, just lost your balance on a step, looking at your cell-phone, hands in your pocket, groceries in your hand, children in your arms, your arm is hurt and tied up. It can happen in all these different positions and you need to be able to fight from the position you’re in. Not get into a stance and then start fighting. It’s too late, you’ll get pummeled. Again start fighting from where the you find yourself in!

5. A better option for the street

In situations when you are “interviewed” before you’re attacked alarm maintain a relaxed non-assuming posture that looks non-threatening. Then when you feel as though you need to defend yourself attack immediately and keep on attacking until the situation is over. This surprises your attackers and gives you momentum in an attack.

When you’re attacked without warning you must be trained to go into the fright reaction. The fright reaction is a move guided chaos teaches that brings your elbows up above your head (protecting it). It also drops your bodyweight for balance and is the springboard for further strikes. It’s important because it’s more protective then a stance and offensive at the same time. Often attackers run right into your elbows and then you’re in a perfect position to continue striking.

That’s all for right now folks! Till the next post!

One thought on “No Stances My Friend!”