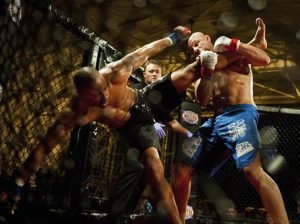 Historically martial arts have created great fighters that are fast, strong and powerful. In MMA competition martial artists have found a new venue in which to practice their techniques against other skilled fighters. These are conditioned athletes who are well trained, pain resilient and mentally tough. Therefore, martial artists spend years perfecting their skills to be able to compete against other trained fighters. It’s very difficult to defeat another highly trained martial artist. As a result sporting competition is taken very seriously.

On the other hand when you defend yourself it’s usually against an untrained attacker who hasn’t learned how to fight. As a result many experts argue that self-defense preparation shouldn’t be taken as seriously as sporting competition. Learning from instructors I’ve heard them argue that you only need a basic application of their technique to defeat attackers. This is troubling and misleading to new students attempting to learn self-defense. The reason is that it ignores who’s applying the technique, the danger of the situation and the criminal assaulting you.

Women, elderly citizens, children and less physically strong men can’t expect to apply “basic” technique to survive an all-out violent assault. Certain grappling instructors state that novices are able to usually perform a double-leg take-down on attackers and control them on the ground easily. I agree your average young male bjj student could make quick work of a punk. I’m less confident that the average female wearing heels and a purse could dominate that same attacker with limited training using basic technique. This applies to an elderly person who finds themselves attacked by a larger and younger attacker.

These individuals can’t expect to train in basic striking technique either and be seriously prepared for assaults. Striking coaches argue when a person learns basic mechanics of punching, kicking and defense they can defeat most people. Again this certainly applies to many young, strong males who train in martial arts. It doesn’t apply to many other people. An elderly person lacks the speed, power, hand toughness and reflexes to immediately damage an attacker. The possibility of breaking their hand is very high and the probability of them being able to knockout an attacker very quickly is very low. This holds true for many women as well.

Furthermore, in many cases when experts argue in this way they refer to very specific situations.  As I stated earlier, in many cases athletic young martial artists can adequately handle themselves in many situations. This isn’t the case for less athletic people and the more variables a situation has the more difficult it becomes for even seasoned martial artists. Any martial artists will need more than basic technique to defeat an attacker who attacks him in the dark, on a slippery surface when the victim is unprepared and completely off-guard.

Also experts who argue this don’t give much thought to the fact that an assailant is armed. So while an attacker may be particularly easy to dispatch weaponless the instant they pull out a weapon they immediately become deadly. Also keep in mind that most weapons don’t come out until after the fight has begun. This is another reason why basic skills aren’t adequate, basic skills in grappling and striking don’t prepare you for once you’ve punched your assailant but then they pull out a punch-dagger and stab you. Keep in mind this happened to one of our students who was skilled in kickboxing. She leaned over after she had defended herself and got punched in the face with this weapon.

4. A criminal is dangerous even if they aren’t trained in martial arts

Lastly because criminals are untrained in martial arts doesn’t mean they’re not dangerous. This is one of the biggest  misconceptions that has been perpetuated in martial arts for years. Experts continually argue because a trainee spends so much time training with other trained fighters when they go up against other people who have not been trained they will be able to easily dominate. This is so wrong I’m going to write another blog post about this in the future. Unarmed combat with no rules against an attacker who’s determined to kill, rob, rape, injure you is difficult.

Untrained determined criminals can give any expert the most difficult fight of his or her life. The reason is that drugs, adrenaline and being crazy provides humans with a level of strength and speed that is unbelievable. The ferociousness needs to be seen to be believed. The amount of damage that a strong attacker on PCP can deliver is frightening. Often people on these types of drugs have been known to get shot, stabbed, burned, hit with nightsticks and keep fighting like NOTHING happened. Do you honestly believe that with basic grappling or striking you can easily dominate a criminal under these circumstances? Let keep it real people…..

To wrap up it’s wrong as an expert to argue that after a person trains in a particular marital art they can easily dominate attackers. Many experts confuse competitive training in the gym or in a match as the same as an homicidal assault. They aren’t the same thing and the way a situation happens in a gym can be very different in another context. That guy you submitted easily in class will be a hell of a lot of harder to beat if he wants to kill you, is under the influence of drugs or adrenaline, has access to weapons, uses improvised weapons found on the floor, surprise attacks you, becomes emotionally enraged and attacks you in a small area with little room to move. To survive this situation takes a high-level of physical preparation and can’t be taken lightly.