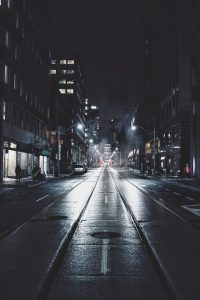 1. The environment effects how you should fight

Martial artists spend a lot of time experimenting to find techniques that work in a real fight. Generally, they argue if the technique works against a resisting opponent of various skill levels then it should be used for self-defense. However, that isn’t true because techniques can work in a “comfortable” training room but be ineffective in real world settings. Criminal assaults happen in unfavorable, dangerous environments that can potentially harm victims. In order to train realistically you must understand how the environment affects your ability to apply techniques successfully. The environment can physically damage you, affects the distance you have from an attacker altering how you can move and the techniques you can use and your ability to see/anticipate movement.

Striking techniques that work in larger settings don’t work as well in smaller settings littered with harmful debris. Competition matches happen in large rings and octagons. Assaults mostly happen in hallways, elevators, in between parked cars, on concrete, staircases, bathrooms and bedrooms. Therefore, strategies such as “striking from the outside”, “maintaining your distance” are impossible as you’re forced to fight nose to nose and engage directly with an assailant. The skills needed to strike effectively on a staircase are considerably different than the ones needed to land a spinning back-kick and step out of range in sparring.

Grappling is also very dangerous in enclosed tight spaces with debris on the floor. I recall grappling in the Renzo Gracie academy where it was PACKED during classes. We’d constantly be falling on other training partners, rolling over them, it was a great time! That said this made grappling more difficult because there were people that could potentially injure you as they were moving etc. Grappling on the ground on concrete is similar as there are a constant array of objects that can harm you. Broken bottles, fire hydrants, chairs, trash cans and other debris for example. In a real assault it’s considerably more difficult to be careful not to crash into these objects in the chaos.

3. They work less effectively in dark places where it’s hard to see

In an assault you must prepare and train in strategies that work in dark, dimly lit places where it’s difficult to see. Many rapes and assaults happen in homes, parking garages, lots and street corners where it’s dark. Often victims report not being aware of attackers presence until a knife is on their throat or they’re being pummeled from blows. Consider practicing sparring in the dark and how this severely alters your ability to apply your techniques. Techniques that require a high-level of hand-eye coordination to work are harder to execute if we aren’t able to see the stimuli.

4. They work less effectively on slippery surfaces where it’s difficult to maintain balance

Assaults frequently happen on wet, slippery surfaces where it’s difficult to maintain your balance and fight comfortably. For example surfaces covered in blood, water and ice are commonplace in real world assaults. Additionally, surfaces covered in debris can effect your balance too. I recall Grandmaster Perkins (founder of Guided Chaos and former police officer) telling a story in class of when he walked into a bar and suddenly slipped on blood and a big guy jumped on him and started punching him. Not the best time to do a spinning back-kick or attempt Muhammad Ali footwork.

In order to judge the effectiveness of a martial art’s strategy and techniques you must consider how effective it works in realistic environments. This analysis isn’t suggesting that conventional striking and grappling arts don’t work, however it is to argue that you must make adaptations to your training to be fully prepared. Remember the key phrase “the way you train is the way you fight”. Applying certain strategies that work in the dojo in an assault could be disastrous. The time to adapt you skills isn’t when you’re attacked but in the dojo itself. By adopting a more realistic way to train you ensure that when you fight you’ll do so efficiently with the highest chance of success.

2 thoughts on “You Don’t Fight Where You Train”